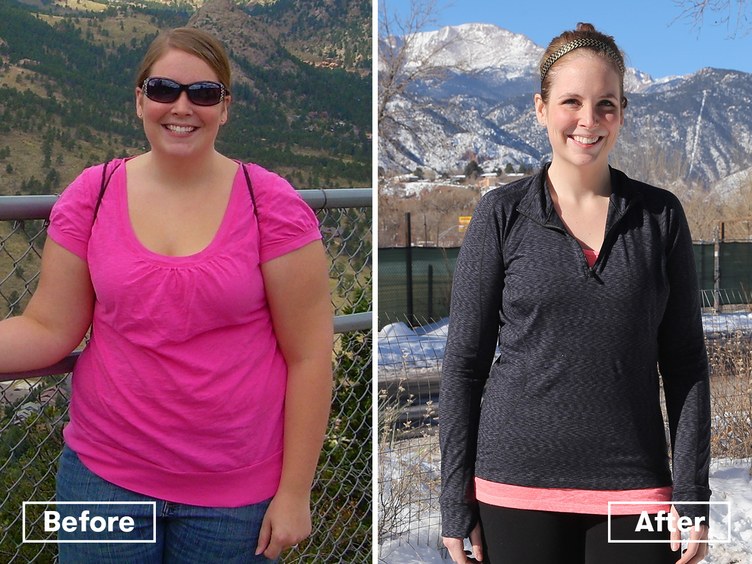 In January 2011, Kayte Hennick was looking at photos from a night out with friends. Instead of seeing fun memories, she remembered how uncomfortable she felt that night. “One photo in particular just hit me,” she says. “Although I was wearing new clothes and had my hair and make-up done, I was insecure about my size and felt as though I stuck out from everyone else.”

“That photo lit a fire in me and I knew I needed to take my weight-loss goals seriously,” says Hennick.

Hennick had struggled with her weight her entire life, but when she was 22 years old, the scale hit an all-time high of 263 pounds. “I just wanted to be able to tie my shoes, shave my legs, or walk-up a flight of stairs without losing my breath. I wanted to go to an amusement park without fear of not fitting into a ride,” she says. And ultimately, after that night out with friends, she wanted to be able to look at a photo of herself and truly love the person she saw.

She’d tried to lose weight before, she explains, but never stuck with her efforts. “I always found an excuse. Eating healthy was too expensive, I felt hungry all the time, working out was difficult, the gym was too far away, or I didn’t want to push myself too hard. I wasn’t mentally ready for the journey. Finally, something just clicked and I knew I had to make a change.”

She got in the habit of working out six days a week, drinking more water than she ever had, and eating smaller, more frequent meals filled with protein, fruits, and veggies. After five years, she’s lost 90 pounds, and she plans to keep it off (and keep going) with the help of her healthy routine. But there were two simple fitness habits in particular that were essential to her weight-loss journey and still keep the 28-year-old on track.

1. She committed to working out first thing in the morning.

While there’s no right answer to whether you should work out in the morning or at night, Hennick found what worked best for her and then stuck with it. “I have to work out first thing in the morning or I completely lose motivation by the end of the day,” says Hennick. “In my previous attempts to get in shape, I would try and go the gym after work. It was easy for me to use being tired as an excuse not to work out. When I decided I was really going to get in shape, I signed up for 6:15 A.M. classes. It took a few weeks to adjust to getting up early, but I soon realized that I had so much energy throughout the day when I worked out first thing.”

Plus, she found that getting her workout in early helped her in other areas of her weight-loss journey. “I find that I make healthier [food] choices throughout the day because I don’t want to ruin the hard work I’ve already put in,” she explains.

The benefits of these habits came full-circle for Hennick—once she started making better nutrition choices, she saw more progress in the gym, too. “I realized I had so much more energy, I was sleeping better, and I was smashing my workouts,” she says. And as her workouts got better from both her A.M. commitment and the healthy choices she was making, she felt encouraged to keep going. “The more time passed, the more I started believing in myself and my confidence soared.”

2. She stayed motivated by asking herself a single question: How will this affect my goals?

Asking herself that simple question, “how will this affect my goals?” when she felt like skipping her workout helped Hennick keep things in perspective. “Waking up and laying in a warm, cozy bed might have felt good in that moment, but I knew it wouldn’t help my progress,” she says. “If what I am doing isn’t helping me achieve my goals then why am I doing it?”

This question became particularly important when she hit a wall with her weight-loss efforts. “Hitting plateaus can be extremely frustrating because you feel like you are doing everything right and not seeing the results you once did,” she says. When she noticed the scale wouldn’t budge, she’d make tweaks in her nutrition and try something more challenging at the gym.

It’s been helpful for Hennick to think about how far she’s come since that photo gave her the push to live the life she wanted. “I used to look at people's transformations and think they were all gifted with something special, something I didn’t have in me. Once I actually started this fitness journey, I realized that lasting change doesn’t come easy; it takes time and dedication.”

And even now, Hennick continues to work toward her shape-up goals. “I’ve had moments when I’ve thought it would be easier not to work out and easier not to eat healthy, but then I remind myself of who I was before I began this journey. I was exhausted mentally and physically, self-conscious, uncomfortable, and I wasn’t living a fulfilling life. Now, I am healthier, stronger, happier, and more active than I ever have been.”

“This journey isn’t a straight line from start to finish, it has peaks and valleys, but what matters is that I keep moving ahead.”